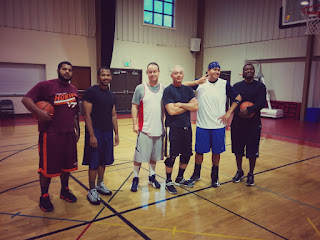 for the first time ever, i walked out of the gym a little after six being the only one to show up.

as i was leaving, several guys had just pulled up. there was a modest count, so i pinged pete and asked him to unlock the doors again.

a total of six guys started playing at 6:20. strange occurrence.

we are not playing next week due to vbs. rest up. i will see you june 15!